About Us
|
Our Staff
|
Tour Our Facility
|
Why Choose Us?
|
Location
|
Testimonials
|
Contact Us

Neil is a native of Niagara Falls, NY and made his way to the Carolina's after his service in the United States Marine Corps.

He is a 1996 graduate of the Pittsburgh Institute of Mortuary Science and has worked for several notable funeral firms across the east coast.  Neil was named the High Point Chamber of Commerce Small Businessperson of the Year in 2001 for successfully operating another funeral home in that community and then went on in 2002 to be nominated for the North Carolina Small Business Association "Young Entrepreneur of the Year".

He came to Alamance County in 2014 with his wife April and family to open Omega Funeral Service & Crematory, allowing him to continue his work and ministry in the funeral profession. Neil is also a North Carolina Licensed Real Estate Broker.

April, originally from Winston-Salem is a 1989 graduate of Robert B. Glenn High School and then went on to graduate from Forsyth Technical Community College where she earned her associates degree in Nursing.  She worked for 10 years in many capacities at High Point Regional Hospital including administration.

After a 10 year break to be a mom to Coleman and Kacee, she followed her husband Neil into the funeral profession and helped establish Omega Funeral Service in 2014. In 2022, she became a licensed funeral director and enjoys serving others in that capacity with Omega. 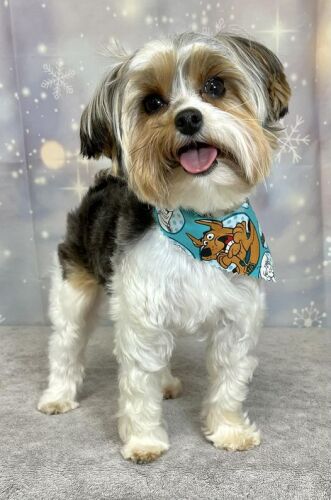 Kipper named after the popular children's tv show "Kipper The Dog" is the newest addition to the Omega Funeral Service & Crematory Family.

He is a rare Biewer Terrier. The Biewer Yorkshire a la' Pom Pon, pronounced “Bee-va” like “Diva”, originated in Germany in 1984 when Werner and Gertrud Biewer bred two blue and tan Yorkshire terriers, “Darling of Friedheck” and “Frufru of Friedheck”.  Much to their surprise, a piebald genetic recessive gene occurred.  This resulted in what is now known as the Biewer Yorkshire a la' Pom Pon.  The Biewer’s found the beautiful markings to be a desired trait and they began the selective process of actively breeding for such markings. They made their way to North America in the early 2000's where the breed has become very popular because of their distinctive look and temperament.

Their amiable, friendly nature makes them great for providing emotional support to humans.

Although not a certified grief therapy dog, we hope Kipper will comfort those who may run into him at the funeral home.

Gary is a lifelong resident of Alamance County who enjoys serving the community. He came to Omega in November of 2018 and serves as a Funeral Assistant where he enjoys helping families during the stressful time when they lose a loved one .

While not working with Omega, Gary serves as a supervisor with Alamance County EMS and is also a licensed Paramedic.

He is a proud husband and father.

Jean and her husband Greg have been residents of Mebane and Alamance County for many years.

She began serving families with Omega in 2015 as a funeral assistant after her mother passed away and she felt the need to give back and help others thru this difficult time in their lives.

Jean has two children and three grandchildren and enjoys collecting antiques and growing all various types of plants.

James is a lifelong resident of the Green Level community in Alamance County.

He came to Omega in 2015 after working for other area funeral homes in many capacities and currently works as a part time funeral assistant. He works full time at Cox Chrysler Dodge Jeep Ram and enjoys cars, helping others, and taking care of his family.

Tommy came to Omega Funeral Service in 2016 and has been working with Alamance County EMS as a Paramedic. He is a 1989 graduate of Robert B. Glenn High School and a US Navy Veteran.

When not working at the funeral home or as a paramedic, Tommy enjoys traveling with his wife Teresa, collecting hot wheels and scuba diving.

He is a certifed crematory operator and a funeral directors assistant.

Chris has been a resident of Alamance County for most of his life. He and his wife Amanda have two sons and he is a full time North Carolina Highway Patrolman.

He has been serving with Omega since 2014 and works as a funeral assistant when needed.

Billy is a life long resident of Alamance County and has been with Omega since 2015 serving in various roles while helping the community.

He retired from the NC Highway Patrol as a supervisor and is a recent graduate of the Funeral Directing program at Fayetteville Technical Community College.

Billy is a Certified Crematory Operator and also is an assistant instructor of the Basic Law Enforcement Class with Alamance County Community College.

He is a proud husband and father to two boys. 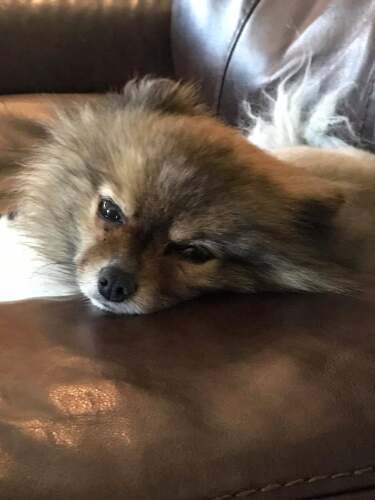 Buster a full blooded sable parti Pomeranian enjoyed his time at Omega Funeral Service & meeting so many grieving families over his 7 years there.

In March of 2021 Buster lost his battle with Cushing's disease and diabetes and crossed the rainbow bridge.

Early on in his life Buster learned the art of begging for what he wanted, whether it was something from the dinner table, a sip of mom’s sweet tea or 30 minutes of scratching by anyone he could find to do it.

A finnicky eater, he loved picking out his favorite pieces from the kibbles and bits bowl while knowing mom would come behind him and clean up the mess it made. Buster, as most dogs do, enjoyed hearing those four words “Go for a ride” and had his special spot on his pillow strategically placed between mom and the arm rest on the door so he could get a few scratches in along the ride. He loved to go antiquing in his stroller, hated baths and trimming of his nails, enjoyed interrupting mom and dads tv time as he barked at the "Wheel of Fortune" dings and "See No Evil" intro show sounds.

Buster enjoyed going to work at Omega Funeral Service & Crematory each day, where he enjoyed hanging out on his bed under moms’ desk. On his way to and from work each day, he would enjoy riding by the field of cows whom he thought were his friends and would beg for the window to be rolled down so he could bark at them as well as the “Black Horse” statue formerly located where the new Twin Lakes Medical Center is being built on Burlington Road. Oh, and Buster knew his geographical landmarks!!! When he saw that these favorite stopping points were approaching, he sprang up ready to bark hello or whatever it is dogs mean when they bark. That trait and instinct always amazed us!!! Buster had a unique smile on his face that many people commented on over the years. He truly was a happy servant.

An intelligent animal, Buster knew people, loved people, and found his way into the hearts of many grieving human lives. It was amazing to see the compassion he had for those who grieved without any formal training. He was affectionally called “Wooshi” by Coleman and Kacee and “Big Boy” by mom and dad even though his small stature at 8 lbs. would not classify him as a big boy. His bark was bigger than his bite. Buster developed both diabetes and Cushing’s disease later in his life and eventually lost the big puff ball fur that Pomeranians are known for. But that did not stop him from living his life. He had his favorite shirts and sweaters that he would wear to the office or anywhere he would go. His travels took him to Myrtle Beach, Niagara Falls, Raleigh, Wilmington, Pittsburgh, and many other short stops along the way.

Buster, as little of a fella that he was, had a big impact on the lives of our family and the countless grieving families he met over the years.

“Until one has loved an animal, a part of one's soul remains unawakened."

"Dogs bring out the best in us"

About Us
Our Staff
Tour Our Facility
Why Choose Us?
Location
Testimonials
Contact Us